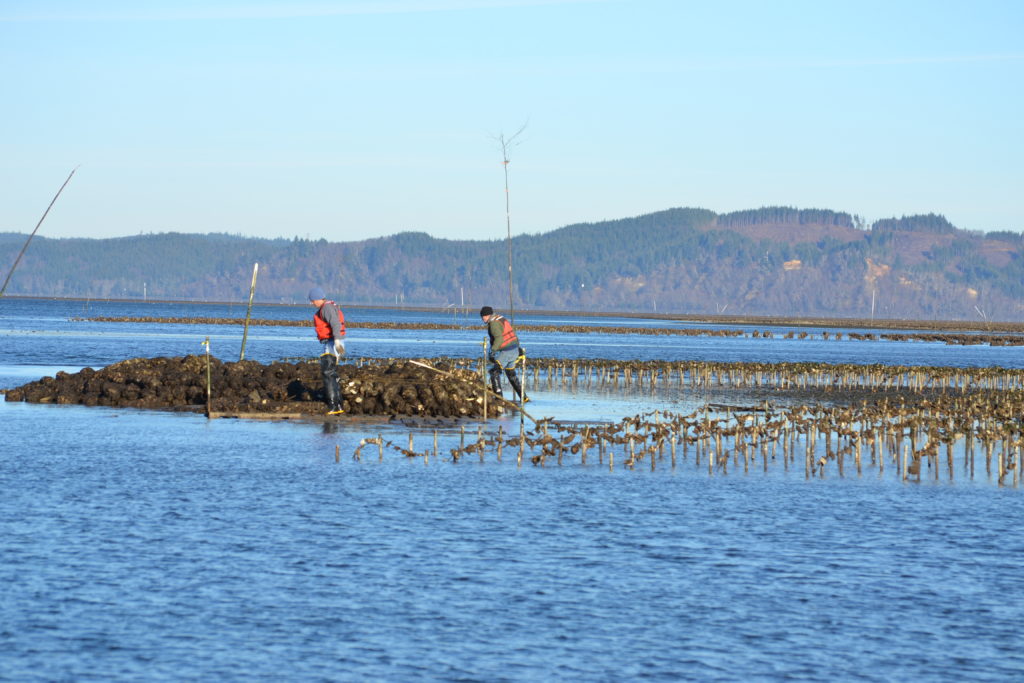 Oyster farming is similar to upland farming, where seed is planted, grown to adult and harvested when appropriate size.

In Washington state, tideland, or farmland, can be privately owned. The seeds in this case are baby oysters called “spat”. They are started in a hatchery and grown out in a nursery to a large enough size where they can be put out on the tideland for growing. At high tide the oyster opens its shell and feeds on the microscopic algae in the water column. At low tide it closes its shell to wait for the water to bring more nutrients. Willapa bay is an 80,000 acre estuary, with saltwater flushing in from the Pacific Ocean twice daily and five major rivers providing fresh water runoff from the Willapa Hills surrounding the bay. This vast mixing of fresh and salt waters provides a nutrient rich “soup” for a wide array of species of plants and animals to thrive and grow. 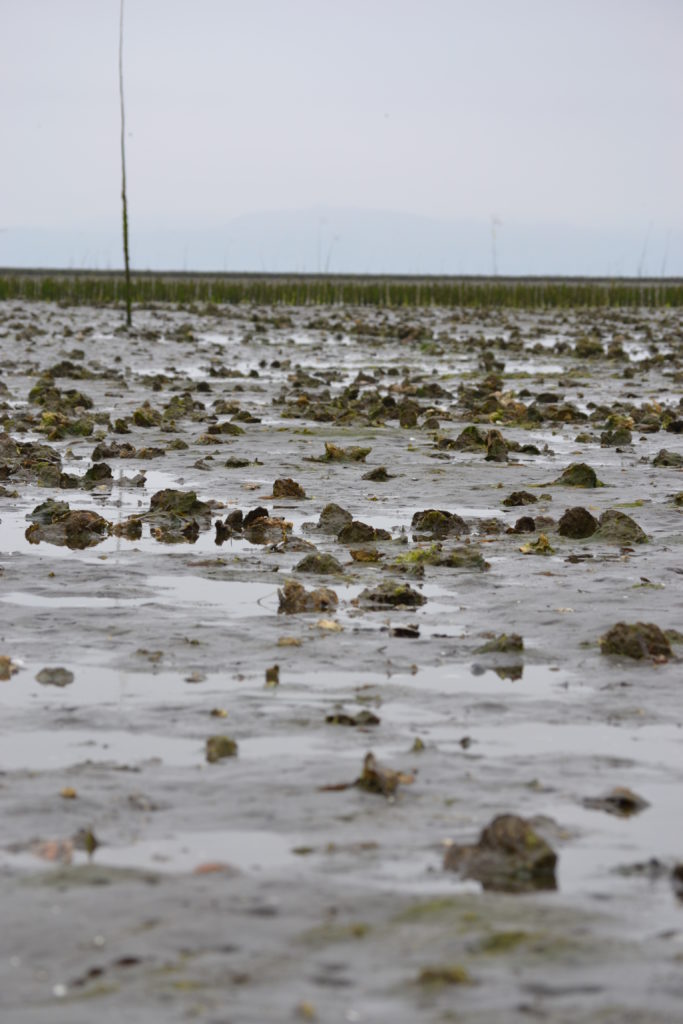 There are different methods employed for growing out the oysters in Willapa Bay. The traditional method is called “bottom” or “ground” culture”, where the young oysters seed are scattered over the tidal ground, typically a very muddy substrate. The seed is usually shoveled or washed overboard from a boat or scow at high tide. The young oyster is left to grow to size where it falls. On very soft ground the oyster may sink into the mud. 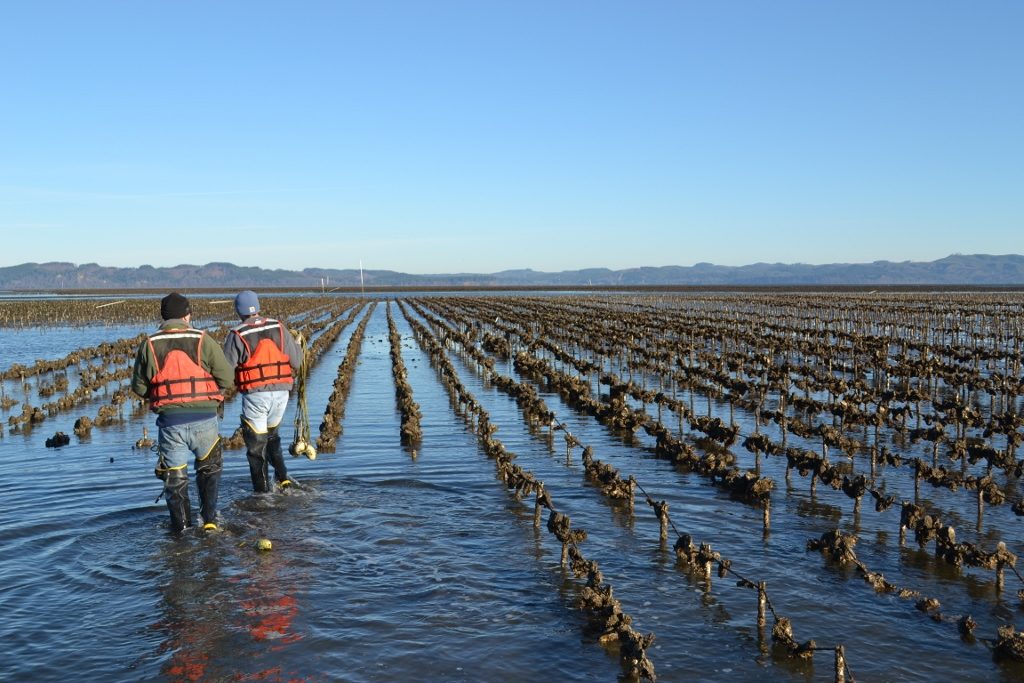 Off bottom culture means the oysters are grown up off the tidal ground. This method typically uses ground that is soft, where the oyster sinks, or is marginal for growth on the bottom, though it can also be used anywhere. The oysters can also be grown on racks or lines suspended in the water column, not near the ground at all.

We use an off bottom method called long lining, where the oysters grow suspended on ropes that are raised off the ground by pipes. There is a notch in the top of the pipe for the rope to slot into, and the oysters grow in clusters suspended by the rope. All the oysters produced by our farm are “Triploid”oysters. They do not get soft and spawn during the summer months, but remain firm year round. 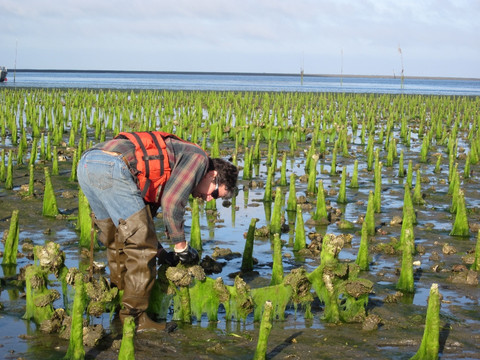 Oysters spawn and set naturally in the environment, but they must have specific conditions (water temperature, salinity) for this to happen. For many years these conditions for a “natural set” were not present in Willapa Bay. We do not rely on “natural” set oysters anymore, but use oyster seed started in a hatchery. We buy most of our Pacific oyster seed from the Whiskey Creek Hatchery in Netarts, OR. The hatchery takes a male and a female oyster and makes them spawn, creating the baby larvae. The larvae at this stage grow in the water column, swimming freely. After about 2 weeks they start to look for a place to settle and attach, like a barnacle. The hatchery collects the larvae at this stage and ships it to the nursery.

The Whiskey Creek Hatchery also grows a triploid oyster. They take female and male oysters and fertilize the eggs with a special male.  The triploid oyster is like a seedless watermelon, unable to reproduce.  This allows the oyster to be like a “winter” oyster year round, being firm and sweet even during the summer months. 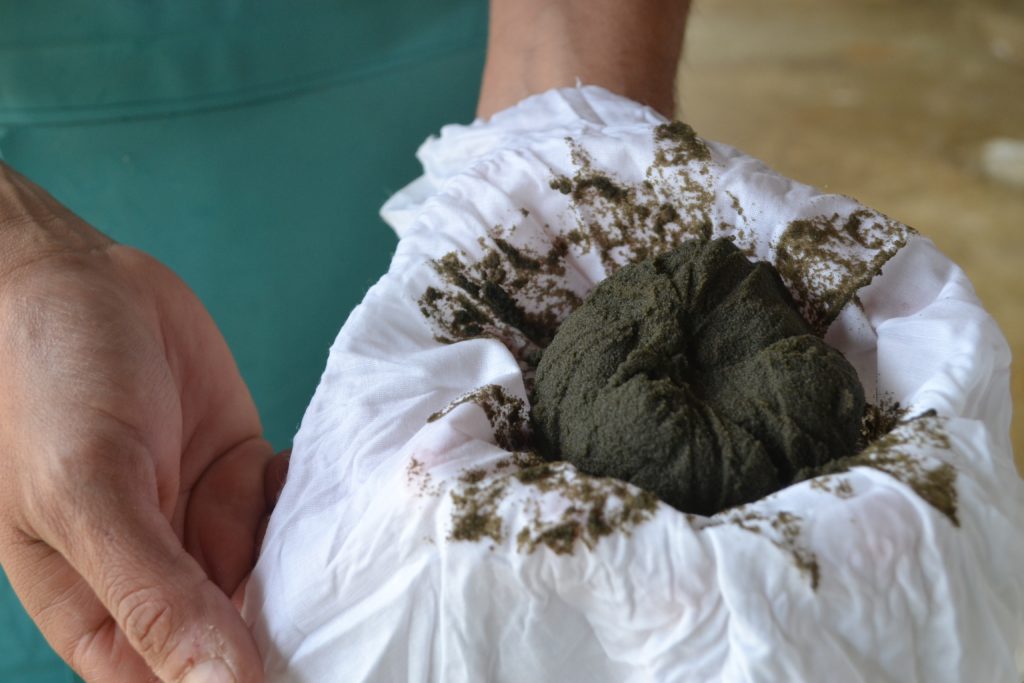 When we receive oyster larvae from the hatchery, they are like a ball of damp sand wrapped in a cloth (about 5-10 million). As soon as possible we introduce them back into the water, in tanks in our nursery. At this stage, the baby oysters are looking for a place to settle, so we have mesh bags of old oyster shells in the tanks for them to set on. Within a day or so they have glued themselves to a piece of shell, and look like grains of pepper. We keep them in the tanks with controlled temperature, and feed them algae for several days. Then we unload the bags onto boats and take them to our seed racks in the bay to grow larger before we actually plant them on our ground. 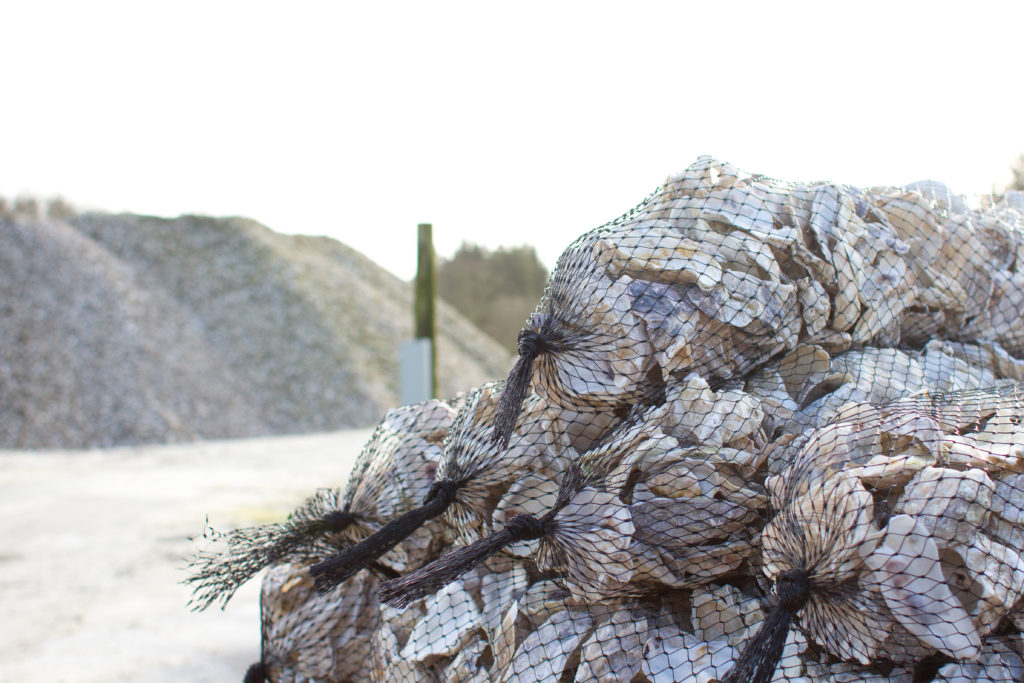 Every year we replant portions of our oyster beds, and throughout the year we harvest our Pacific oysters based on size and market demand.

For a number of years now Ekone has been farming 4c’s Natural Triploids TM. The triploid oyster is a hybrid (like seedless watermelons or bananas), and therefore is sterile. Because of this, the triploid oyster spends all of its time growing and wastes no effort on reproduction.

So in the summer months, traditionally the spawning season for oysters, our triploid oysters are firmer and fatter than their diploid cousins growing in the same waters.In the summer be sure to request the triploids. We think you will find them as firm as the winter oysters.

The harvested oysters are brought to our processing facility and immediately placed under refrigeration control.  The oysters are usually either shucked or separated and cleaned for live sales.  We use the Pacific oysters for our line of smoked oysters. Our smoked oysters are one of our signature products here at Ekone Oyster Co., grown, harvested and processed in the U.S.  Our original, Habanero Hots, Teriyaki, Lemon Pepper and BBQ are the five flavors of smoked oysters currently being processed at Ekone Oyster Co. Other canned products are smoked mussels, albacore  tuna, smoked tuna and smoked tuna with lemon. Visit our shop to purchase products.